Welcome to the neighborhood! 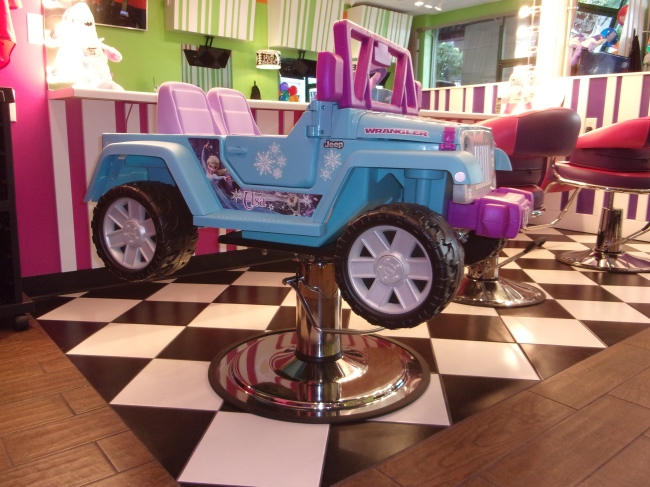 Disney’s Frozen Jeep is one of the haircut stations at Sharkey’s Cuts For Kids in Encino.

Now open in the Fountain Court at Encino Town Center, right next to the ever-popular More Than Waffles, is a new salon designed with kids in mind. Sharkey’s, headquartered in Connecticut, has been garnering high praise and rave reviews since it’s inception in 2002.

Want to know more about Sharkey’s new Encino, location? Feel free to ask for more info or submit feedback using the form below. 🙂

Posted in Beauty & Fitness, Entertainment, Fun stuff to do with kids aged 6 to 14, Uncategorized

The iconic landmarks and incredible sights of Yosemite National Park are ready to welcome you back. With fewer crowds and stunning views, now is the perfect time to visit Yosemite!

Enjoy this video from our visit a couple of summers ago!

Posted in Fun stuff to do with kids aged 6 to 14, Travel

Redondo Beach, Calif.  (November 10, 2017) – During the holidays, treat your in-laws, parents or yourself to a blissful Southern California coastal experience. Shade, the waterfront luxury boutique hotel in Redondo Beach, serves as the perfect seaside destination for family and friends visiting from out of town and looking for a respite from cold temperatures, or locals craving a waterfront escape this holiday season.

Their special Holiday Package is available from December 20th to December 28th with rates starting at an exclusive low price of $269 per night* with a 2-night minimum stay and will include a gourmet hot chocolate kit, in-room mini Christmas tree, and complimentary gift wrapping.

Adding to the merry cheer, starting November 13th, Shade Hotel Redondo Beach is partnering with local South Bay non-profit, Cheer for Children and providing a “gift drop off” box for toy donations for nearby families and children in need.

Located just six and a half miles from LAX, Shade Hotel Redondo Beach is a sanctuary for Los Angeles residents and visitors from around the globe.

Shade Hotel, the waterfront luxury boutique hotel on the forefront of the Redondo Beach Waterfront Revitalization Project, is in the vibrant coastal community of Redondo Beach and serves as the premier destination for guests in search of the quintessential Southern California experience. Located just 7 miles south of LAX, the property features a serene, contemporary setting enhanced with natural elements of sand and stone, calming color palettes of blues and greens, and a living succulent wall. The property offers 54 luxurious rooms with picturesque views of the marina and opulent amenities such as Tempur-Pedic beds and Chromotherapy lighting. For meetings, sophisticated boardrooms are available and are equipped with built-in state-of-the-art technology and open-air patios. The rooftop Skydeck offers a private pool and bar, and stunning views of the ocean and horizon. Adjacent to the main hotel building is a 9,034-square foot fully-dedicated event building with expansive indoor/outdoor space for weddings and events and houses the notable waterfront dining destination, Sea-Level Restaurant and Lounge. Shade Hotel is an ideal location for luxurious seaside getaways, dream beach weddings, business meetings or special occasions.

Comedy And The Queen 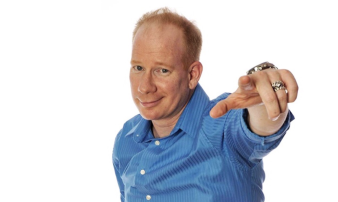 Seasoned comedian, Darren Carter headlines the August 14 Ships & Giggles Comedy Night. Known for his impressions and on-point improvisation, Carter is recognized for his time on The Tonight Show with Jay Leno, Comedy Central, BET, and Showtime. Carter, aptly named “Party Starter,” will have the crowd laughing as soon as he takes the stage.

Hailing from Washington D.C., Courtney Black, currently resides in Los Angeles and is the co-host of The J. Anthony Brown Radio Show by day and performs at popular comedy clubs like The Comedy Store, The Laugh Factory, and The Improv by night. In addition to guest starring on the TV pilot of Timid Pimps and the movie How Not to Propose, Black is currently writing on the recently green-lit animation The Slimbones.

Ashley Craib, is a SAG/AFTRA actress and Los Angeles based comedian. Craib started her career in improve by training at The Groundings before moving forward with stand up comedy. You can currently catch Craib on her YouTube show, Living with the Boyfriend.

Aiko Tanaka wears several different hats in the performance community. Tanaka began her career in the spotlight as a model in Tokyo then moved to Boston to pursue her dreams of becoming an actress. Before becoming a successful stand-up comedian, Tanaka moved to Los Angeles to practice dancing which supported her dreams of being on TV and film.

Perry Kurtz moved out west from his east coast home to San Francisco to pursue a career in comedy after leaving a high-stress job as an art director. In 1983, and years of performing 6 nights a week, Kurtz moved down south to Los Angeles where he currently lives and performs as a paid regular at The Comedy Store.

After Hurricane Katrina displaced Boogie B from his home in New Orleans, he became a highly sought after comedian in the D.C., New York, Baltimore and Philadelphia metro areas. With encouragement from his family and friends, Boogie B moved his act to Los Angeles where he currently performs at churches, comedy clubs, birthday parties, and wedding receptions.

Monday, August 14, show starts at 8 p.m. (Happy Hour is from 5 – 7 p.m.) Located onboard The Queen Mary, The Observation Bar & Art Deco Lounge was formerly the First-Class Lounge and served as the hub for lively discussions over delicious drinks.  Original artwork still hangs above the bar, which is lined with Art Deco tables, chairs and decor. The Deco vibe is retro chic, cool and swanky.

The Queen Mary is located at 1126 Queens Hwy, Long Beach, CA 90802. As part of the daily Free After 6pm* access to the Queen Mary, the admission to Local Band Hangout and Ships & Giggles Comedy Night are now free when entering the ship after 6:00pm.

*Certain block out dates due apply.

I was just noticing LA Mommies looking for places to eat with their kids besides Chucky Cheese. Thought you’d like to know about this new offering from Jessica Biel:

Delish.com takes you inside Jessica Biel’s new restaurant Au Fudge, which opened its doors on March 4 in Los Angeles.

In the feature and video, Jessica opens up about the inspiration behind the restaurant, which she and her confounders envisioned as a stylish escape for parents who can unwind with a glass of rosé on the patio, while their kids (supervised under the watchful eye of an au pair) play in a drum circle or climb an indoor treehouse.

Not only is Au Fudge a playground for kids and parents, it also serves delicious dishes and treats – Jessica’s personal favorites are the vegan Caesar salad, chicken nuggets and French fries, and avalanche bars (brick-thick rice krispy treats studded with chocolate chips and sprinkles).

You can read the full piece at http://www.delish.com/restaurants/a52533/jessica-biel-restaurant-tour/.

Posted in Food, Fun stuff to do with kids aged 6 to 14, Video

Originally built in 1914 as a private residence, Yamashiro (“Mountain Palace” in Japanese) took its inspiration from the classical Asian art and architecture that was the passion and business of its original owners the Bernheimer brothers. Over its 102-year life, it’s taken on many identities including a brothel and a boarding house, before becoming a private cocktail lounge for the golden era of the Hollywood elite in 1963. A full-service restaurant soon followed, ultimately catapulting Yamashiro into a world-famous dining destination in the 1970s and ’80s. The property’s regal Asian influences and breathtaking, 180-degree views from downtown Los Angeles to the Santa Monica shore have been featured in popular films such as Memoirs of a Geisha, Gone in 60 Seconds, and Kill Bill, as well as numerous travel shows.

Yamashiro Hollywood is launching a new Sunday Brunch buffet this Mother’s Day, May 14, from 10 a.m. to 3 p.m. The iconic restaurant, which previously only opened for dinner, will continue brunch service year-round every Sunday from 11 a.m. to 3 p.m.

A longtime Hollywood favorite of locals and travelers alike for celebrating special occasions, the scenic restaurant’s brunch service will feature a buffet with multiple themed stations with dish selections including crab legs, shrimp cocktail, oysters, prime rib, chicken and waffles, omelets, build-your-own salads and cold favorites like smoked salmon and yogurts. For dessert, guests can choose from a variety of danishes and cupcakes.

All moms will receive a complimentary glass of champagne on Mother’s Day.

Brunch starts at $29 for kids and $50 for adults. A $65 option will include brunch and bottomless mimosas, Bloody Marys or bellinis.

Yamashiro is located at 1999 Sycamore Ave. and is open from 5-11 p.m. on weekdays and 5 p.m. to midnight on weekends, in addition to Sunday Brunch service. Reservations can be made through OpenTable, via phone 323.466.5125 or by email info@yamashirohollywood.com.

Z: The Beginning Of Everything

Z: THE BEGINNING OF EVERYTHING available to stream on Amazon Prime Video January 27th.

Celebrate in style Wednesday, Thursday or Friday as Amazon takes over several speakeasies in the New York and Los Angeles areas where they will be hosting free, open bars to the public.

Z is a biography series based on the life of Zelda Sayre Fitzgerald, the brilliant, beautiful and talented Southern Belle who becomes the original flapper and icon of the wild, flamboyant Jazz Age in the 20s. Starring Christina Ricci (Monster) as Zelda Fitzgerald, Z starts before she meets the unpublished writer F. Scott Fitzgerald (Gavin Stenhouse, Allegiance), and moves through their passionate, turbulent love affair and their marriage-made in heaven, lived out in hell as the celebrity couple of their time. The series travels through the wild parties, the wicked jazz, the dissolute artists of the era, as well as the alcoholism, adultery and struggle with dashed dreams and mental illness that characterizes their later years.

Pour Vous (LA), No Vacancy (LA), Raines Law Room (NYC) and The Back Room (NYC) will all be taking part in the #ZTakeover January 25th, 26th and 27th. Not only will these venues be serving up prohibition era cocktails, they will also be decorated to the theme of the series with branded barware, 20’s jazz bands, bartenders in classic 20’s attire and tons of other early 20th century accents.

We love this look for New Year’s Day, featuring a soft modal scarf from The Teabag Project with original teabag art by Ann Laser custom printed and hand finished to order. A design collaboration with EncinoMom’s Lisa Keating, this new line of scarves and home décor are intended to promote world peace through inner peace. Taking this intention as a jumping off point, we’ve curated this look with the Prints For Peace scarf at its center.

A turquoise leather jacket and bright orange earrings against an outfit of warm neutrals is easy to wear across seasons and oceans. Fresh and feminine in just the right mix to meet your dreams in 2017. The Teabag Project’s peace scarf is also available in cashmere for $85. Purchase of products created by Lisa Keating for The Teabag Project benefit the artist, the designer and the makers with a portion of proceeds funding literacy projects. Purchases made before midnight 1/31/16 may use discount code: VIDA25-97669sbb for a $25 credit toward their first purchase!